A downloadable Ghost Story for Windows, macOS, and Linux

Waking up disoriented and weary, Tabby (Short for Tabitha, but she's not gone by her full name since 3rd grade) wakes up in the parlor of an abandoned house. Her keys, wallet, and phone are missing and she can't remember why she's in such a place... not that it's too far gone from some of the other places she's woken up in over the years.

It doesn't take long for her to meet Evie, a ghost, and this greatly irritates Tabby on account of she was hoping to just grab her things and leave quickly. The Larkspur house on 77 Oleander, however, is not Evie's home. It is not the site of a bittersweet tragedy. It is not the skeleton left behind by a family's unexpected death. Tabby will realize this too late, and then, when she's finally ready to heed Evie's warnings, she will forget.

Important note for those who have downloaded the demo version:

If you go to launch the game from itch and you've previously downloaded/installed the old version, which is now the free demo, you'll need to click the settings button (the gear wheel) and select the full version of the game (v 2.0) rather than the demo version you previously installed.

77 Oleander Avenue Ghost House Investigation is a narrative driven Horror Mystery game that follows Tabby, a paranormal investigator who wakes up in an abandoned house with no memory of where she is or why she's there. Through the course of the game you'll learn more about the family that once occupied the home, the mysterious circumstances surrounding their deaths, and ultimately decide what you believe about the haunting of 77 Oleander. Set in a small coastal city in southeastern North Carolina, the game explores deep-seated religious trauma, the nature of ghosts and demons, the way we create narratives of a person's Death, and contemplates the prospect of flirting with a supernatural orb.

The facts, insofar as they can be trusted, stand as follows: The Larkspur House, also known by its address of 77 Oleander Avenue, was built in the early 20th century and remained in the possession of the Larkspur family until every member died suddenly between 1990 and 1992. Since that time, it has stood abandoned with only tenuous plans for a historic site designation standing between the property and demolition (or worse, renovation into an anachronistic bed & breakfast). The last living patriarch of the family, Garrett Bertram Larkspur, died at the age of either 84 or 86 depending on which paper you read, with his official cause of death listed either as congestive heart failure or overwhelming grief and sadness. Two years prior to his death, his only child, Gloria Larkspur, died in a car accident alongside her husband, Thomas, while on business in Little Rock, AK. While merging onto a highway, they drove over a length of barbed wire left behind by construction workers - the ensuing crash killed them both instantly, as well as three others caught in the collision. Gloria and Thomas left behind their only child, Christian Larkspur, who continued living at the Larkspur home until his untimely death in 1992 at the age of 25.

Tabby knew all of this when she entered the Larkspur house at roughly 10pm on July 20th, 2022. She knew that the Larkspurs were a reclusive and private family, one with few connections outside of their immediate neighborhood and church, and that the four of them were the sole and final occupants of the home. When Tabby very quickly meets a ghost named Evie, then, she begins to wonder... if this isn't Evie's house, and if she isn't part of this family, then why is she here?

The full game contains 9 endings, multiple routes for you to explore,

a complex and insidious mystery, something horrible that may be watching you at all times, dozens of opportunities to flirt with a ghost, and more!

A unique system for selecting your final route: Your beliefs and theories about 77 Oleander will determine the ending you reach.

A Real Dog* that you can pet

A full soundtrack, available for free with each copy of the game

*Dog is real, dog is not composed of fur or flesh.

This game was originally created in short form for the 2021 Trans Game Dev discord server's Birthday Game Jam and that version of the game is still available for free as the demo version of 77 Oleander.

Page Up - Rolls back to previous dialogue/choices

In order to download this Ghost Story you must purchase it at or above the minimum price of $5 USD. You will get access to the following files:

This game is really cool! Try the demo and if you like it check out the full version!

My review below discusses the game's structure and themes, and while I tried not to spoil specific plot beats, you might pick up on some hints about the nature of the endings and how to reach them. So, don't read on if you want to go into the game with a blank slate.

The game opens with three routes you can play in any order. Roughly speaking, the routes teach you more about the Larkspurs, the family who owned the house; about Evie, the ghost that haunts the house; and about Tabby, the protagonist who is trapped in the house. After completing all three, there is a cool segment where you lay out your beliefs about everything you've learned by answering a series of questions. Your beliefs determine which ending you get; there are three "major" endings, and a variety of "game over" bad endings where the story concludes abruptly, usually with your death.

This is a horror and mystery game, but it's not really a traditional mystery. What if the detective in a mystery story collected all the available evidence, but couldn't actually solve the mystery? The events took place in the distant past, all the major players are dead, and there's so much ambiguity that the best you can do is make an educated guess. You can't gather all the suspects in a room and dramatically lay out the truth. So what kind of conclusions do you draw, and what kind of story do you tell? It's that kind of mystery.

While the major endings give closure, they don't really give you "answers". There is one central mystery which I felt the story explains very clearly, and expects you to understand (you can choose to disbelieve the answer, but I didn't try). Aside from that, pretty much everything else – what happened to most of the Larkspur family, the nature of the entities in the house, the events of the protagonist Tabby's childhood – is unexplained or presented with a healthy amount of vagueness.

This is presumably on purpose, because a recurring theme is Tabby's frustration with "paranormal investigation" and "true crime" media – how the stories they tell are often conjectures based on flimsy and ambiguous evidence, and those conjectures paper over the lives and experiences of the victims. I think 77 Oleander wants you to realize that the stories it's telling you are messy, complex, and human; they're mysteries, but not the kind you can wrap up in a neat bow and claim you've solved. 77 Oleander wants you to wade through the ambiguity and draw your own conclusions, but it stops short of letting you confirm all those conclusions, because getting the "right answer" isn't the point.

(As an aside, I'm noticing strong parallels with the visual novel Umineko as I write this.... Umineko tackles similar themes, but in more of a pulp/fantasy style, presenting you with an Agatha-Christie-esque island mansion murder mystery that was purportedly commited by a witch. 77 Oleander kind of feels like a modern, slightly less fantastical take on this aspect of Umineko, replacing "witches and magic" with "ghosts and hauntings", and criticizing modern paranormal podcasts instead of.... whatever people in those circles were doing in the 90s and 00s? Also, something I find really interesting is that two of 77 Oleander's major endings have prominent red / blue color motifs, which are also important colors with specific meanings in Umineko. Hmm....)

The three major endings actually branch moreso based on your beliefs in the supernatural, as opposed to your beliefs about the human elements of the story. Did these people die in an accident, or were they murdered? That's not really important. Is the malicious entity that keeps killing you a ghost or a demon? Surprisingly, this actually matters. Is Evie a real ghost, or are ghosts a bunch of bullshit, and she's some kind of hallucination? That matters too.

That's because 77 Oleander isn't just about ambiguous unsolvable paranormal mysteries. It's about how to talk about those mysteries respectfully without trampling on the victims at their center. I think what the game wants to say is that you can't do that, or at least it's very difficult, without talking to the victims themselves. Without their input, you're always just scribbling over someone else's life.

This interacts in an interesting way with the themes of ambiguity and unanswerable questions – I mentioned earlier that there's essentially only one major mystery in the story with a clear answer. But this answer comes from a ghost! So, can you trust the answer? I think the game really, really wants you to trust it. It seems outright cruel to me not to trust it. I think the game is saying, "Only the dead themselves can speak with authority on their own lives!" Paranormal podcasts by randos shouldn't have the final say!

So that's my feelings about the game's overall story and themes. Well, I also want to mention that I liked the moment-to-moment writing a lot too. There's a fair amount of levity and humor to balance the more tense or upsetting scenes: the awkward flirting between Tabby and Evie, the painfully accurate unscripted podcasts, Tabby's disdain for stupid Ghost Adventures bullshit like EVPs and spirit boxes. The presentation is great too! There are a few really bombastic action sequences that are a joy to read and watch. The music and visuals are excellent, and set the mood well both for quieter scenes and more intense scenes.

Finally, there is a nutcracking dog statue that is really cute. I really liked seeing the dog. You even get to give it a name. So, you should buy the game.

Oh wow, I'm so glad you enjoyed the game so much! This is such a lovely review and it makes me happy to see that the game's themes landed so well! 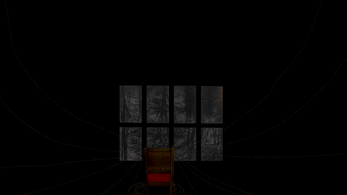 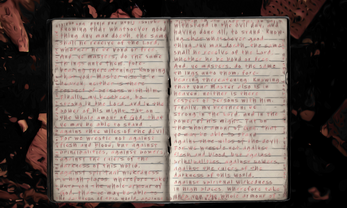 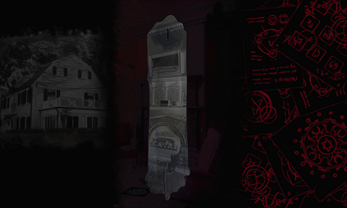 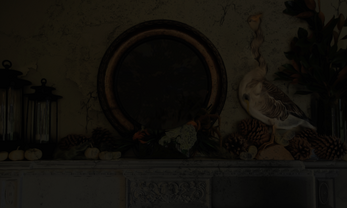 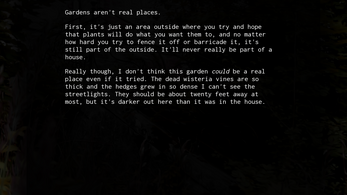 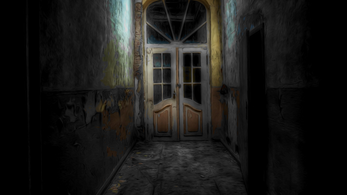 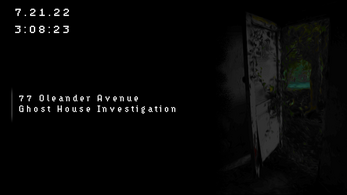 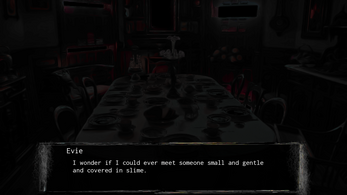 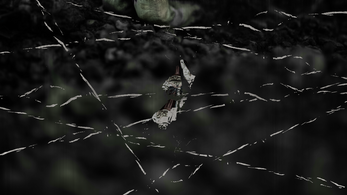 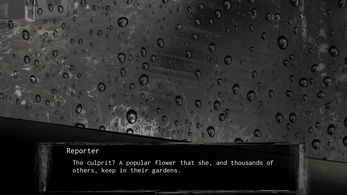 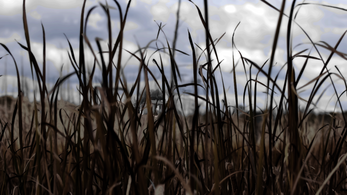 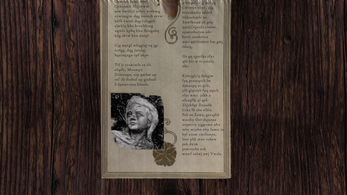